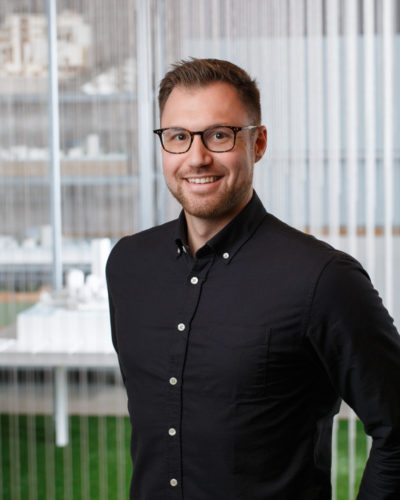 Sean has brought a new level of coordination and skill to our BIM design work since joining Moriyama & Teshima Architects as BIM Manager in 2016. His duties have included Revit integration, best practices, project support, proactive standards development, complex systems integration, BIM coordination, content creation, in-house training, troubleshooting, and construction document production. In addition to his project experience, Sean instructs internationally trained architects and technologists through BIM in Professional Practice at Toronto Metropolitan University – a position that he has held since 2013. His commitment to teaching BIM keeps him at the forefront of its advancement and integration and has afforded Sean a wealth of extra experiential knowledge that he has actively re-invested in his professional teams.

Sean is consistently focused on applying sensible digital solutions and workflows to the many projects as MTA. Most notably, Sean led our BIM team on the Canadian Port of Entry project at the Gordie Howe International Bridge, which is a major 53-hectare border crossing between Windsor (Ontario) and Detroit (Michigan). Conceived as 9 buildings, Sean and the team used Revit, Navisworks, and BIM360, to model highly accurate, strategically coordinated building models, that all reference the large Canadian Port of Entry site. Sean’s approach to highly developed and coordinated models allowed for the detection of construction interferences and potential design efficiencies, which kept this extremely complex project ahead of the curve at each milestone.