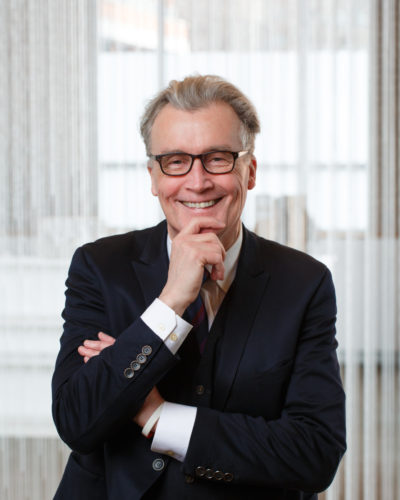 Diarmuid Nash has enjoyed over 25 years with Moriyama & Teshima Architects, having joined the firm in 1988 after completing work on the Canadian Embassy in Tokyo. A Partner since 1998, Diarmuid is particularly skilled and adept at managing complex, public projects that must often address the divergent priorities of diverse user and interest groups. His substantial expertise in the planning, design and construction of major cultural landmarks is demonstrated in projects such as the Canadian War Museum in Ottawa (Governor-General’s Medal for Architecture 2008), the National Museum of Saudi Arabia, the Waterloo Region Museum in Kitchener, Ontario (OAA Design Excellence Award 2011) and the Niagara Falls History Museum in Niagara Falls, Ontario.

As Partner in Charge, Diarmuid has led international design teams through complex large-scale projects such as The Delegation of the Ismaili Imamat in Ottawa (with Maki and Associates of Japan, Governor-General’s Medal 2012) and the recently completed Aga Khan Museum and Ismaili Centre in Toronto (also with Maki and Associates). He was also the Partner in Charge on numerous significant public buildings and spaces including the City of Surrey’s new City Hall and Civic Plaza, the Edmonton Federal Building’s new Centennial Plaza and the new Government of Canada Visitor Welcome Centre on Parliament Hill, Ottawa (in Design Development). As a leader, Diarmuid brings a unique vision and an unparalleled depth of understanding in creating enduring, landmark spaces that compel people to visit again and again.